How to Protect Yourself from Extortion

Money extortion, electronic extortion, and cyber or Internet extortion happen every now and then.

If you are a shop owner, you are demanded by some offenders to pay for their protection to prevent something bad (such as an assault on the shopkeeper or damage to his or her store or goods) from happening.

Yes, you are being extorted, if you are into these kinds of situation.

And here we focus on what to do if someone is extorting you, and ways to protect against extortion or blackmail.

What Is Considered Extortion

In Wikipedia, extortion is defined as:

"Extortion (also called shakedown, outwrestling, and exaction) is a criminal offense of obtaining money, property, or services from an institution, through coercion."

And there are many forms of extortion, like the most commonly seen money extortion, electronic extortion, online or net extortion. There are strict laws against extortion, and the authorities take these kinds of attempts very seriously.

So what's the penalty for extortion?

Extortion is generally punished by a fine or imprisonment, or both. Under federal and state laws, extortion carries up to a 20-year prison sentence. And the punishment for extortion depends on whether force was used in extorting money or other property. 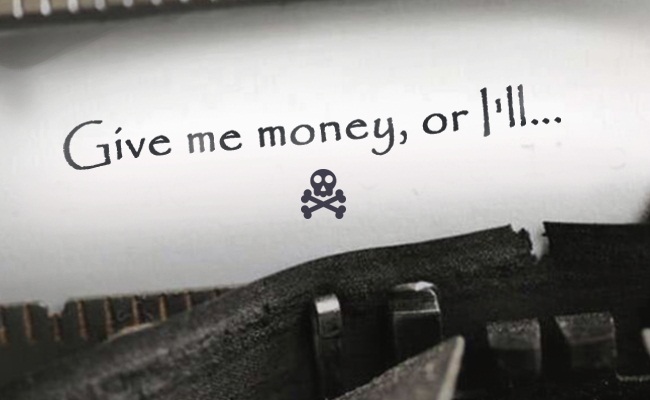 What to Do If You Are Being Extorted

If you feel that you are the victim of an extortion attempt, how do you handle threats of extortion?

Always remember, the most effective way to deal with extortion or blackmail is to report the suspected crime right away. Agreeing to pay will only make matters worse – once the criminal realizes that you are willing to pay they will only make further demands in an attempt to drain your cash and victimize you further.

How to Report Extortion

Follow the below steps to effectively handle the threats of extortion:

Step 1: Collect your documents or information to prove that someone is blackmailing you. This could be a spoken threat or a written threat. We'll explain the details in the later part.

Step 2: Report the event to the local authorities. You need to go to your local police station to file your report in person instead of calling 911.

Step 3: You may also want to report the extortion attempt to the FBI and state police to further protect your rights and help you get the justice you deserve, or the person that is blackmailing you lives in a different state.

While you are contacting the local police, be smart to deal with extortionists. Don't make them mad, or, they may go to extremes and do something harmful to you.

How Do You Prove Extortion

An indispensable step to ask for police help when dealing with money extortion is to prove extortion.

According to an organization providing online law support, "It is incumbent upon the prosecution to show that there was a malicious threat of injury against a person, which was communicated . . ."

Then how to prove someone is blackmailing you?

To prove someone is trying to extorting you, you need to gather evidence, and then report to relevant authorities. You may check your state's law to learn the elements of extortion, which will generally include a spoken threat or a written threat. And usually the written evidence is much stronger.

In a word, how to prove extortion is a professional issue about law. It is better for you to consult specialized legal professionals or lawyers.

How to Deal with Cyber Extortion

What to do with online extortion? If you are under internet extortion, you can also contact the company hosting the suspicious website. Web hosts take their reputations seriously, and they do not want to be seen as assisting criminal enterprises.

If the criminals involved claimed to be from a legitimate entity like the IRS, the FBI or a company like Google, you can also contact the agency or company and let them know. There is often a cat and mouse game between the bad guys and legitimate businesses, and notifying those companies of the extortion attempt will help them protect themselves – and their customers.

How Can You Avoid Extortion

Extortion can happen to anyone of you. It means that you need to take proactive steps to protect yourself and stop the potential victimizers in their tracks.

Here are some ways that you can protect yourself from blackmail.

These days a great many extortion efforts originate in the online world, so it's important to learn how to avoid cyber blackmail.

Safeguarding your computer can go a long way toward stopping someone from extorting you.

Make sure your computer is running the latest antivirus software and that the virus definitions are updated on at least a daily basis. Be wary of unsolicited emails and avoid clicking on unknown links. Be on the lookout for the early warning signs of a malware or virus infection, including a sudden slowdown in computer performance or being inundated with pop-up ads.

Be sure to protect your other electronic devices as well, and lock down your wireless network with a strong password.

Never forget to secure your WiFi-enabled security camera, if you have one. Home wireless surveillance camera is easily getting hacked, and hackers may take advantage of your private videos to extorting money from you. You should be running security software on your tablet and smartphone as well, since an infection there could spread to the rest of your home network.

These days many of us live our lives online, and that can be a lot of fun. It is great to catch up with old friends and college roommates, but be careful what you share and with whom.

A good way to stop extortion or prevent someone from blackmailing you is to keep your Facebook page and other social media sites private, and check the security settings frequently to make sure you are protected.

Thus, to avoid being extorted money, be careful what you share with the public via social media, since an enterprising criminal or an ex-partner with ill intent could put the pieces together and find a way to blackmail or extort you. Sharing personal details on social media is always a risk, so think before you post.

Way 3: Be Aware of Current Scams

In some cases a criminal who tries to extort money from you will have real harmful information to reveal, but in other cases they will just be bluffing.

How you approach the extortion attempt may depend in large measure on how believable the individual's claims are, so it pays to be aware of current scams and the stories of other victims and potential victims.

There are always plenty of these kinds of scams going around, both online and off. They take many forms and pop up in many parts of the country. One common extortion attempt involves a caller purporting to be from the FBI, IRS or other governmental authority. The caller claims that the victim owes money or has committed a crime, and they demand money to head off the arrest or reduce the charges.

The fact that the IRS, FBI and other branches of the government do not operate in this manner is one clear sign that these are pure extortion attempts. If you are contacted by anyone claiming to be from the IRS, FBI or other government agency, you should contact the police right away to report the attempted crime, to prevent yourself from being extorted.

Click to learn more about how to prevent door-to-door scams.

We hope you'll never be a victim of extortion. But if you are chosen, don't be scared. You may try the above-mentioned to handle the extortion or blackmail. If you have experienced this kind of thing, share with us how you handle it, if you don't mind.